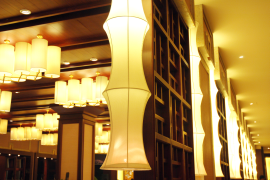 27 April 2013. Air Marshal Morgan Prince faces a crisis that pits duty against love. His son, Errol Kimberley Prince, has been robbed while in possession of files that could destroy the special relationship between the USA and the UK. The thief is a mysterious scarred woman. Air Marshal Prince doesn't dare bring in the police, let alone the Ministry of Defense.

He calls an old friend in the Secret Intelligence Service, Emelia Sanderson, who in turn calls her old friend Misha.

Once again, a crack team of freelance Agents enters a small hotel:

Zlatan is the new man on the crew, an old comrade of Jacob who worked on a few jobs for the CIA back in the day. The Agents needed a wheelman, and Zlatan was available.

Zlatan is from Bosnia. Zlatan drives fast cars. Zlatan watched monsters kill his family when he was just a boy.

We have come to the Stafford Hotel, Saint James's Place, London. It is noon. Air Marshal Prince and his dazed son Errol are in Errol's hotel room, where he crashed after a Friday night party at the hotel's American Bar. Errol has, of course, been robbed.

Misha tells Air Marshal Prince that Emelia sent the Agents to take care of this matter quietly. Tell us everything, she says.

He tells her that his son, a respectable law student at King's College, loves jet fighters. Air Marshal Prince was in possession of a TOP SECRET EYES ONLY video presentation comparing the fifth-generation Sukhoi fighter jet with the latest performance tests of the monumentally expensive and long-delayed F-35 Lightning II Joint Strike Fighter project. The results are damning. Owing to a recent change in leadership at the Ministry of Defense, there is a new movement to cut military budgets. So the video presentation ends with a proposal to reduce the UK's investment in the doomed F-35 project. This will be a devastating blow to the US defense industry, not to mention the trans-Atlantic relationship.

That video is what he copied onto Errol's tablet. Because he loves his son.

Now, according to Errol, some foreign-sounding girl has got the tablet. He was talking to her at a table in the back of the bar when he just passed out. When he woke up, he'd been dumped in his room and his belongings had been looted.

And once she finds out what is on the tablet, the potential for blackmail will be extreme.

Errol's mates from The Dickson Poon School of Law (I am not making this up, this is a thing that exists) at King's College were too busy partying to notice his abduction. That is, except for his loyal mate, Rodger Gammell aka "Rodger Dodger."

Rodger Dodger saw an exotic-looking dark-haired bint carrying Errol out of the bar and up to a room. Rodger Dodger confronted her in a scene captured on security cameras. Rodger Dodger tried to get grabby with her.

Rodger Dodger is now in the janitor's closet with his head twisted all the way around.

After conning hotel security to let him look through at security camera footage, Jacob directs Zlatan to the body. It is a horrific thing. It is a serious embarrassment that needs to be disposed of.

Rodger Dodger is nearly two metres tall and is completely stiff due to rigor mortis. Problem.

I have a hammer, says Sami Härkönen in a not-at-all-creepy tone. Problem solved.

Sami and Zlatan get to work cheerfully breaking the corpse's bones so that they can fold him into a large laundry cart and wheel him down to the team's Land Rover. On the way down, the two Agents get mistaken for room service by some guests. A kid gives them a shirt to clean.

They manage to deliver the corpse, wrapped in a carpet, all the way to the walk-in freezer in Jacob's safe house on Surrey Street.

Jacob hacks into Rodger's social media accounts to leave a fake trail. So long lads, I'm off to tropical parts with some terrific bird I just met, love, Rodger.

Walk in the Park 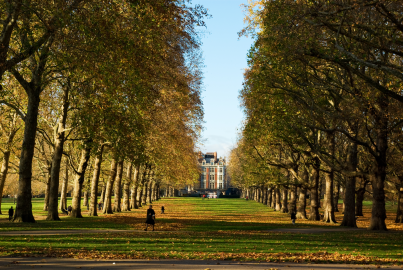 Jacob tracks Errol's stolen iPhone via GPS to East Village, the residential area that used to be the London Olympic Village. It is now in the hands of a Russian prostitute in Soho, who just happened to find it. Sami distracts some hookers while Misha steals the phone.

The phone's GPS log says it spent the night at an Olympic Village apartment. No way to tell which floor it was on.

Meanwhile, Misha has a date with a bunch of party-happy law students. Errol's other mates are having a repeat of their bacchanal at the American Bar. Misha waltzes in wearing something short and pretty and starts asking questions.

There is a fellow, they say, who is always hanging around with Errol and Rodger and Thom, trying to get into the cool crowd. His name is Dylan Peters but everyone just calls him "Snotty." They use him to copy papers, do their research and buy Indian take-away. He'll do anything to get accepted. Oh, and he has an uncle who used to be a mob boss, Gary Camon. Gary just got out of prison last year.

No, he wasn't here last night, they say. Where can I find him now? asks Misha. Oh, he's right behind you.

Snotty is off and running, right out of the hotel and into Green Park. Evening is a splendid time for a foot chase.

Jacob is nearby. Jacob decides to join the chase. Jacob mugs a passing London Olympic Legacy commissioner, Ian Fletcher, and steals his bicycle.

Jacob's enthusiasm is unnecessary. Misha is in better shape than Snotty. Misha catches up to Snotty. Misha beats the living daylights out of Snotty.

In the car with all the agents. Snotty talks in between sobbing. Snotty told Uncle Gary about the RAF classified videos Errol was always showing to impress his friends. Gary sent some special girl to steal it. Clearly, Gary is the man to talk to. Gary stays with his girlfriend at a show unit in East Village and runs a contractor business helping to finish work on the apartments. He's surrounded by goons.

Misha calls Gary Camon with Snotty's phone and sets up a rendezvous at Waterloo Station.

Waterloo / Couldn't be safe if I wanted to 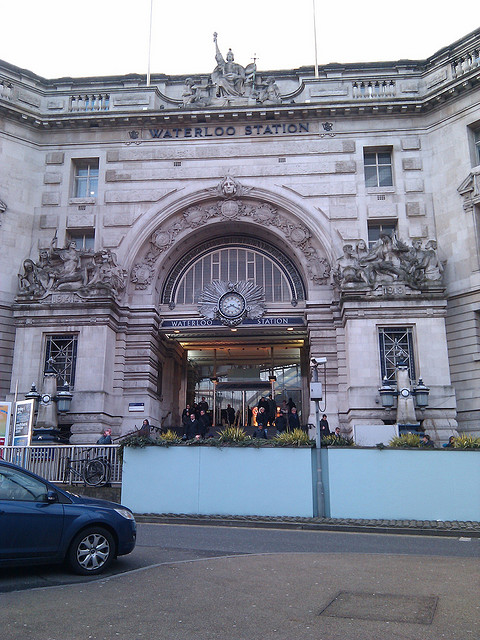 The Agents arrive at the station early and get set up. Plenty of crowds, less likelihood of violence. Jacob hides some webcams around the concourse just in case. Zlatan waits in the car outside, monitors things on camera and provides situational awareness.

Misha and Sami take up positions on opposite ends of a concourse cafe. Sami hides his face with the Daily Telegraph. Misha sits down in the open with poor Snotty, who is terrified.

A small Romany woman with a scarred ear arrives, dressed in very practical jacket and trousers. Misha eyes her, sizes her up. She's a fighter, but Misha's better.

The woman's name is Vin. She's Romanian. Misha's done some Romanian work, so they speak in Romanian.

I know where your people are, Vin brags. One man in a Land Rover on the street. One man peeking through holes in a newspaper behind me. And another man hiding at a far corner.

Vin says the UK sold her father out to Ceaucescu. Vin says she had to survive on the street, fighting wild dogs. Vin says she's all grown up. She's come to the UK because she intends to see it burn.

Misha is concerned about this.

Gary Camon's on the phone. Air Marshal Prince gave Misha authority to cut a deal and pay for the tablet. She tries to make an offer. But Gary wants more after figuring out that the tablet's worth a lot more than, say, ten thousand pounds.

No deal, Misha says. Vin acts all casual. Then Vin looks into Misha's eyes and tells her to sleep.

Mental haziness. Misha is particularly stubborn and fights off the dizziness.

Vin grabs Snotty and drags him like a bull dragging a matador. Misha cracks her fists on Vin's skull, and the Romany girl barely notices.

Near Jacob, a lady in the crowd is unable to keep control of her dog, a large borzoi (Russian wolfhound). It's barking and raising all Hell, pulling at the leash.

Jacob is on the way. Zlatan is on the way. Vin backs off towards Sami, who distracts her with a thrown chair. Misha kicks at Vin, hits Vin's shin, barely slows Vin.

Sami slams an Orangina bottle on Vin's head. Vin looks upset. Snotty, who is being dragged through this brawl by one arm, is even more upset and collapses. Vin bails. She bails by leaping up one storey to the top of the shop booths.

In the car, Zlatan tells Jacob to set the barking borzoi's leash. Jacob gets all wishy-washy and apologises to the old lady even as he does this. The dog is loose. The dog heads towards Vin.

Zlatan speeds the Land Rover up to the curb and charges in with spanner in hand. Sami uses Zlatan for a boost up to the top of the shops and chases after Vin. But Vin's already made it past the shops and is just jumping down towards the escalators. About to vanish into the crowd.

The station guards shoot the dog, of course.

Jacob and Zlatan have failed to save the dog, so they try to get the guards to lower their guns and save Vin. She's had her throat ripped out, and she's fading fast.

The dog's owner is some well-connected society lady, and she screams all manner of abuse at the guards. She will only remember Jacob's involvement later.

Misha calls her boss, Emelia Sanderson. She says to Emelia: This is someone who may know about a threat to the country. Also, Vin was capable of incredible physical feats. Vin needs to be taken in and examined, quietly.

Emelia calls up her black bag team and pulls some strings. Ambulance arrives. They stabilise Vin and take her away. Emelia sends someone to hush up the incident at the station, as best as they can.

After a quick debriefing by Emelia, Misha gets the go-ahead to raid Gary Camon's place in East Village.

Agents of KL, by the numbers