From 14 to 18 May 2013, 30,000 musicians, groupies and tourists descend upon Malmö, Sweden for the annual Eurovision Song Contest, televised around the world and watched by more than 100 million people.

Sweden has a proud tradition of winning (and hosting) Eurovision, going back to 1974, the year when Abba won for "Waterloo" and the entry from Portugal "E depois do adeus" was used to signal the start of the Carnation Revolution in that country.

In this midst of this year's revelry, a terrorist conspiracy will strike, signalling the start of a different kind of revolution...

...unless our Agents can stop it. 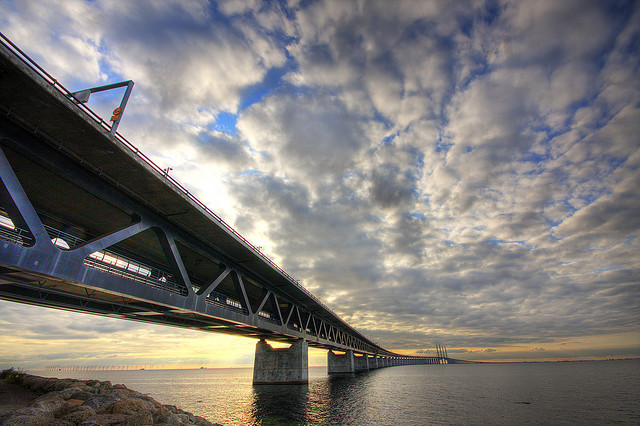 A double-track railway and dual carriageway bridge stretching nearly 8km across the Øresund strait. On one end, it links to Sweden, and on the other end it joins to a 4km undersea tunnel that emerges in Denmark. It is the setting for the Danish/Swedish TV crime drama The Bridge.

In accordance with the Schengen Treaty and the Nordic Passport Union, you do not need to show your passport when crossing between Denmark and Sweden via this bridge, although there are random customs checks when entering Sweden.

During the course of the Eurovision Song Contest Job, our Agents have crossed this bridge, singly and in groups, a total of 12 times.
PICTURE CREDITS, from top to bottom, left to right.
Banner picture © Wgy1952 | Stock Free Images & Dreamstime Stock Photos
Öresund bridge HDR © Håkan Dahlström used under a Creative Commons license | Flickr
Powered by